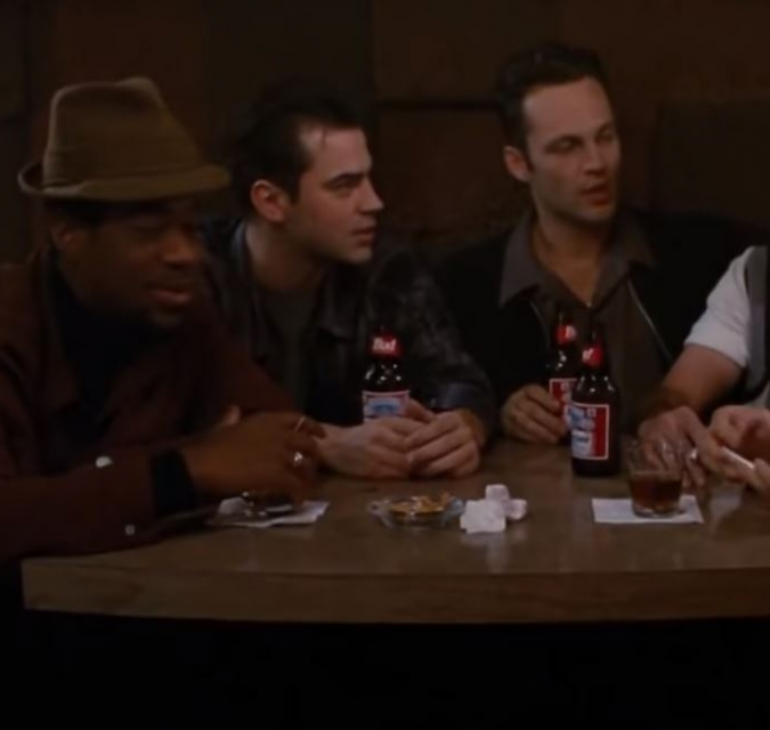 “You’re so money, baby, and you don’t even know it.” If there were a ranking of the best pep talks in movies, this line would jump right in. Delivered by overconfident Trent to his shy friend Mike, it is one of the countless memorable quotes from Swingers, an era-defining indie gem that came out 25 years ago.

The plot is simple, like with most good things. Mike (played by Jon Favreau, also the writer) has recently moved to Los Angeles to pursue his dream career: acting. Like most of his friends, he is having a tough time landing a part. All while living in an alien city whose slang and dress code he is still learning. However, his main preoccupation is love: six months after breaking up with his long-time girlfriend, Mike is still unable to move on (or even get a call back). Luckily, he has a solid group of mates who are hell-bent on getting him back in the action: sulking at home is simply not going to be an option.

Swingers (1996) is many things at once. First and foremost, it is possibly the best post breakup movie ever made: you put it on and you immediately forget your sorrows - catapulted into a world of camaraderie, impromptu trips to Las Vegas and aimless driving around. It’s also a fascinating time capsule of the swing revival scene in the mid-90s. You know – bowling shirts, Goodfellas quotes, mind-blowing dance skills. What else? Scratch the surface of bravado and chest thumping, and you see Swingers is actually an honest and sweet movie that deals with male insecurity, societal expectations – and above all: bonding.

After what feels like a lifetime of quarantining, we have all gotten a bit rusty at social relationships. The lucky among us have been kept afloat by stubborn friends who will keep calling us, and who show up for a (well-distanced) walk in the park. Swingers reminds us of how vital it is to surround ourselves with friends. It also pokes (a lot of) fun at dating rituals, and in particular breaking the ice with strangers. As we witness Mike’s awkward attempts, we cross our fingers when things look promising, and we scream “Oh you don’t say THAT!” at the screen when he screws up.

Swingers gets more interesting the more you know about its production. The movie was Favreau’s very first attempt at screenplay writing, and it took him a mere week and a half to wrap it up (it helped that it’s semi-biographical). Budget was so tight that the crew rarely asked for permission to film inside the packed music venues that feature so frequently – they just went in and hoped for the best. Speaking of music: more money was spent on securing song licenses than on anything else. And… no doubles: the real actors learned how to swing dance just for the movie. One final nugget: there’s an odd scene where Mike is on the phone, goes to the fridge, opens it, talks a little more, then closes it – the only reason for that was that the room had awful lighting and the fridge’s lamps were necessary to see the characters. Total bill: $250,000. Sold to Miramax for $5 million.